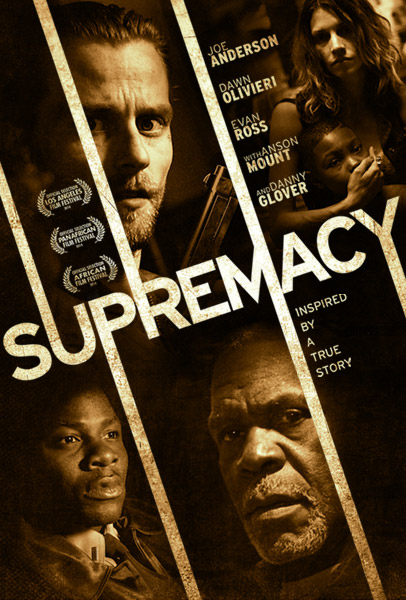 Taut, chilling… a just-paroled white supremacist and his ruthless girlfriend kill a cop and take an African American family hostage. The patriarch of the family, an ornery ex-con himself, must rely on his wit and understanding of the racist mind to free his family, but not before he must confront his own brand of bigotry and anger. Inspired by a true story. (IMDB)

“It’s the stuff of nightmarish fiction but the nonfiction source material adds a level of depth to its commentary on racism and race relations in America today.” –IndieWire

“A ‘Desperate Hours’-style thriller…refreshingly far from the usual movie black and white.” –Deadline

“One of the best performances of Glover’s career, he is electrifying.” –MovieShark

“You’ll be holding your breath awaiting the outcome.” –Screen Invasion

“Dawn Olivieri and Danny Glover are at the top of their game in this tense thriller. Scriptwriter Eric J. Adams pushes the pyschological limits of every character…in this this taut work.” –Sydney Morning Herald